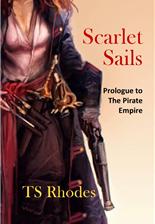 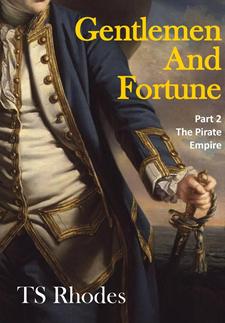 Scarlet MacGrath strode from the ruin of the captain’s cabin, grabbed the schooner’s captain by the front of his shirt and dug the muzzle of her flintlock into the flesh of the man’s face, up under the cheekbone. The white of his eye rolled upward. They stood against each other for a long moment, and finally he said, steady enough, ”There ain’t no payroll, the men are in on shares.”

She backed off then, half a thoughtful step, leaving the print of her pistol barrel on his cheek, and asked a little more politely, “What are you meanin’ by that?”

The New World lures the dispossessed with opportunities for riches and freedom.  Join pirate captain Scarlet MacGrath and her crew of outlaws, misfits, and runaway slaves as they carry out missions of diplomacy, mercy and aggression.

The pirates are gathering strength but they’re still hunted by navy frigates, and soon it’s Scarlet’s turn to dance with death in the form of Navy Captain Robert Davenport. Scarlet’s used to sailing close to the wind, but can she sail away from the HMS Nightingale and the long arm of English law?